Peter Voulkos (born Panagiotis Harry Voulkos; 29 January 1924 – 16 February 2002) was an American artist of Greek descent. He is known for his abstract expressionist ceramic sculptures,[1] which crossed the traditional divide between ceramic crafts and fine art. He established the ceramics department at the Los Angeles County Art Institute and at UC Berkeley.[2] 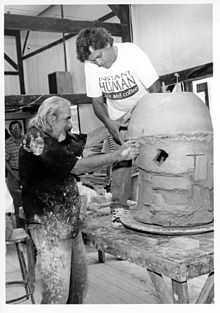 Peter Voulkos and Peter Callas working on a 1998 Stack in Belvidere, NJ.

After high school, he worked as a molder’s apprentice at a ship’s foundry in Portland. In 1943, Peter Voulkos was drafted into the United States Army during the Second World War, serving as an airplane gunner in the Pacific.[2][4]

Voulkos studied painting and printmaking at Montana State College, in Bozeman (now Montana State University), where he was introduced to ceramics[2] (Frances Senska, who established the ceramics arts program, was his teacher).[5][6] Ceramics quickly became a passion. His 25 pounds of clay allowed by semester by the school was not enough, so he managed to spot a source of quality clay from the tires of the trucks that would stop by the restaurant where he worked part-time.[2]

He earned his MFA in ceramics from California College of the Arts and Crafts, in Oakland. Afterwards, he returned to Bozeman, and began his career in a pottery business with classmate Rudy Autio, producing functional dinnerware.[2]

In 1951 Voulkos and Autio became the first resident artists at the Archie Bray Foundation for the Ceramic Arts, in Helena, Montana. It is from his time as Resident Director (1951-1954) that the lineage of his mature work, later in full bloom during his tenure at the Otis Art Institute in Los Angeles, California, can be traced.[7]

In 1953, Voulkos was invited to teach a summer session ceramics course at Black Mountain College in Asheville, North Carolina.[3][8] After the summer at Black Mountain, he changed his approach to creating ceramics. The artist eschewed his traditional training and instead of creating smooth, well-thrown glazed vessels he started to work gesturally with raw clay, frequently marring his work with gashes and punctures.[8]

In 1954, after founding the art ceramics department at the Otis College of Art and Design, called the Los Angeles County Art Institute, his work rapidly became abstract and sculptural.[4] In 1959, he presented for the first time his heavy ceramics during the exhibition at the Landau Gallery in Los Angeles. This created a seismic reaction in the ceramics world, both for the grotesquerie of the sculptures’ shapes and the genius marriage of arts and craft, and accelerated his transfer to UC Berkeley.[2]

He moved to the University of California, Berkeley, in 1959, where he also founded the ceramics program, which grew into the Department of Design.[7][9] In the early 1960s, he set up a bronze foundry off-campus, anticipating the metal cast Wurster Hall, and started exhibiting his work at NY’s Museum of Modern Art.[7]

He became a full professor there in 1967,[9] and continued to teach until 1985.[10] Among his students were many ceramic artists who became well known in their own right.

He died of a heart attack on February 16, 2002,[2] after conducting a college ceramics workshop at Bowling Green State University, Ohio, demonstrating his skill to a live audience.[11]

While his early work was fired in electric and gas kilns, later in his career he primarily fired in the anagama kiln of Peter Callas, who had helped to introduce Japanese wood-firing aesthetics in the United States. Peter Voulkos is also among those who raised ceramics to the non-utilitarian, aesthetic sphere. While setting up the ceramics department at UC Berkeley, his students were authorized to make a teapot, “only if it didn’t work”. Voulkos started this new trend while in Los Angeles in the 1950s, saying, “there was a certain energy around L.A. at the time”.[12] He is most commonly identified as an Abstract Expressionist ceramist.[2]

Voulkos’s sculptures are known for their visual weight, their freely-formed construction, and their aggressive and energetic decoration. During shaping, he would vigorously tear, pound, and gouge their surfaces. At some points in his career, he cast sculptures in bronze; and in early periods his ceramic works were glazed or painted and/or finished with painted brushstrokes.

Peter Voulkos is also memorable for the live ceramics-sculpting sessions he would lead in front of his students, demonstrating live the hard work being his ceramics style, and his talent throughout this process.[4][2] His creativity quest sometimes led to the use of commercial dough-mixing machines to mix the clay, and the development of a prototype for an electric potter’s wheel.[2]

In 1979 he was introduced to the use of wood firing in anagama kilns by Peter Callas, who became his collaborator for the next 23 years. Most of Voulkos’s late work was wood-fired in Callas’s anagama, which was located at first in Piermont, New York, and later, in Belvidere, New Jersey. This unique partnership and the resulting work is considered by many curators and collectors to be the most exuberant period of Voulkos’s career[citation needed].

View All
View All Entertainment Movies
#41